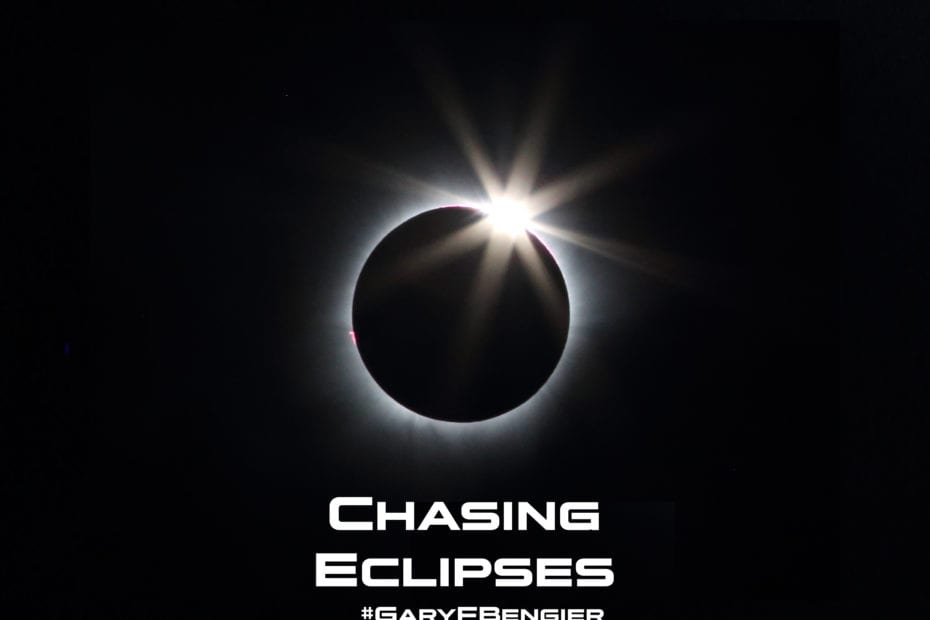 A fellow eclipse chaser uttered that line as we stood still breathless after watching our first total solar eclipse in 2005. He went on to explain. With our astronomical mastery of celestial mechanics, we can calculate the occurrence of every eclipse as far into the future as we wish. They occur roughly every 1 ½ years somewhere on Earth. We know exactly where that 70-odd mile wide line of the moon’s shadow will be painted across the Earth’s surface. Since approximately ¾ of the Earth’s surface is water, about that proportion of total solar eclipses (TSEs) can best be seen from water, so many trips involve cruise ships. The complex interaction of Earth, Sun, and moon mean that often the trips place you in some exotic spot. The eclipse chaser had just watched his eighteenth TSE, and he had been to some interesting places.

This, our first TSE, barely qualified. It was a “hybrid” eclipse, so for much of the shadow’s central path, only an annular eclipse could be seen, and totality only lasted 28 seconds from our viewing spot aboard a ship near Pitcairn Island. I had chanced on this eclipse trip advertised in one of my astronomy magazines. Taken with the idea, and with the money to afford this vacation, I asked my wife. “Honey, how about a cruise trip to Tahiti?” That was an easy yes. My wife didn’t care that it was an eclipse trip. We had a fine vacation trip, sailing out of Pape’ete, to Pitcairn Island, the place where the mutineers from HMS Bounty had hidden out after sending Captain Bligh over the side. Our son, age eight, met a little boy his age from the island whose surname was Christian, no doubt descended from Fletcher Christian, the leader of the mutineers. The trip ended by sailing back through the Marquesas Islands.

Despite my wife’s initial nonchalance about the eclipse reason for the trip, and the eclipse’s shortness, my wife cried. We both were hooked.

Now, fifteen years later, we’ve been fortunate to have witnessed eight TSEs. It has indeed been a great vacation algorithm. We’ve been to parts of the world we had not considered traveling to, but for this hobby. As an example, see the photo below of the path of the 2008 TSE, which crossed near the North Pole, down over eastern Russia, then western Mongolia and China. A secret is that you must study the meteorology to find the spots along the path with the least cloud cover predicted for that time of year. Clouds are the bane of eclipse chasers. No one wants to spend the time and money to travel for a TSE, then to be clouded out. The best viewing chance for this TSE was in western Mongolia.

We traveled with another 50 eclipse chasers, with Wilderness Travel organizing this trip. Planning had gone on two years in advance, because there are lots of logistics, organizing travel, lodging, staffing in a rough part of the world, and the accompanying meteorologist and astronomer.  Alex Filippenko, famed astronomer from UC Berkeley, was along with us in Mongolia. Dedicated chasers are sometimes known as “umbraphiles,” because of the love of spending time in the moon’s shadow. Another term is “lunatic.” (That’s an eclipse chaser joke.)

We flew into Ulaanbaatar, then took a small chartered jet. It refueled at a military airstrip (the only place available; the tour company had made arrangements well in advance). Everyone needed to exit and stand along the runway while soldiers watched, holding automatic weapons. It was not your typical gas station stop. We flew on to land at a dirt airstrip in the far west. Then we were tossed around for eight hours in Soviet-era vehicles, crossing Mongolian steppe country—all without actual roads. As our Mongolian and Kazakh drivers raced each other across the steppes, dust churning up behind, I had the vision that I was in a Mad Max movie. We waved to the locals, who were still wandering across the grassland with their wagons and gers (the Mongolian name for a yurt), with their yaks and sheep grazing beside. At last we arrived at our campsite near Hoton Lake, close to the Kazakh border and slept in gers. We had a handheld shower and primitive outhouse for facilities. Everyone ate in an outdoor tent. I was afraid to ask what the mystery meat was for one of the several dinners, eyeing the marmots that wandered around our camp.

We had come to this place to be at the center of the track of totality, to watch totality for 2 minutes, 8 seconds. Let me be clear that eclipse chasers are inside this narrow path, and the closer to the centerline the better. Just outside this shadow, witnesses experience a partial solar eclipse. Alex joked that this unfortunate label should be changed—not a partial eclipse, but an “I missed it” eclipse. Some wag said the difference between a partial and a total solar eclipse is the difference between watching a little league game through a knot hole in center field, versus watching the World Series seventh game from behind home plate. Or between being almost pregnant and being pregnant.

Alex gave several brilliant astronomy lectures. After one describing the upcoming eclipse, one of the locals raised a tentative hand, and his question was translated. So then, he asked, we do not need to worry about the dragon eating the sun, as we’ve heard in the old stories?

Eclipse day arrived quickly. Everyone gathered excitedly and set up equipment for viewing and photography. I waved to several of our drivers to look through my solar telescope. At first shy, they then shared the excitement as they understood what was about to happen.

Totality is a mind-blowing experience and still leaves me in awe every time. I recall it was near 75 degrees and we had a brilliant, clear blue sky at midday. Within the span of an hour, the temperature plummeted by 15 degrees. Birds began acting strangely, returning to roost, as if sunset approached. Crazy shadows played over the land, fooling the eyes. We played making shadows and could see the halfmoons reflected onto white blankets spread on the ground.

The shadow across the Earth’s surface moves at different speeds for different eclipses, and at different places along the path, all determined by celestial mechanics, but it can easily move at 1,000 mph. For the Mongolian eclipse, I had the impression that I could see it coming. That impression can appear as a blackness from hell, bearing down. It is accompanied (often) by a 360-degree sunset, redness at the horizon all around. The first “diamond ring” appears as you can take off protective glasses and watch totality just with your eyes. (The diamond rings are the last of the sun’s rays peeking through mountains on the edge of the moon. There is a first ring at the beginning of totality, and a second one at its end.)

Then above you blazes the dark moon surrounded by the sun’s corona, like the eye of God, the corona pulsing and shimmering, the sky around black as stars come out. You stand transfixed.

On this trip, both of our children were along. It was the first eclipse for our daughter, age 26. She cried too.

The experience of a total solar eclipse is primal, a sudden recognition that we are tiny creatures on this Earth, at the mercy of large natural forces. Since eclipses occur roughly every 315 years at any particular place on Earth, one might imagine how these occasional events might be interpreted, and passed down from generation to generation by pre-civilized people thousands of years ago. They occur often enough to become part of folklore, and oral storytelling tradition, stories about powers beyond human comprehension.

The eclipse trip to Hoton Lake did not finish without further adventure. After totality ended, everyone voted to head back after sunset rather than to spend another night in the gers. We loaded into the old vehicles and had a madcap night, our drivers navigating by starlight. There were no vehicle refueling stops, and the drivers grabbed jerrycans of gasoline off the vehicle roofs and poured them into the gas spouts (placed dangerously between the front seats) while driving. A vehicle in front of us broke down around midnight. I still remember holding my bright halogen flashlight for them while the Kazakh drivers disassembled the carburetor on a rock (17 pieces; I counted them), then expertly reassembled it, and off we went. Yes, eclipse chasing can involve some exotic travel.

We’ve been convinced that seeing a total solar eclipse is the most dramatic experience in nature. If I’ve interested you to try to experience this yourself, then look ahead to the 2024 TSE that will cross the U.S. (See the map.) Check the meteorology carefully for the least cloud cover. (Hint: we are looking at Texas.)

I’ve included below a primitive video (it was primitive a technology lifetime ago, in 2008), which might evoke an understanding for the experience from inside the moon’s shadow.

Be well and stay calm. 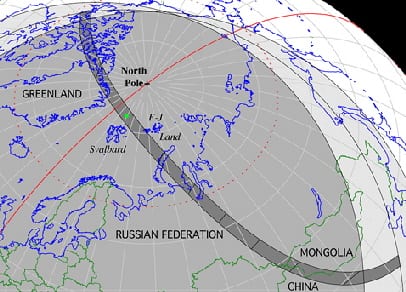 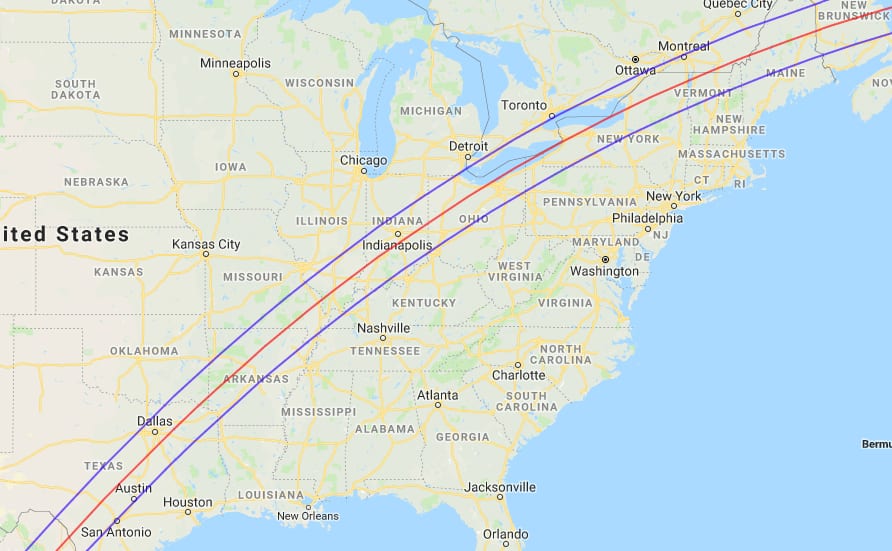 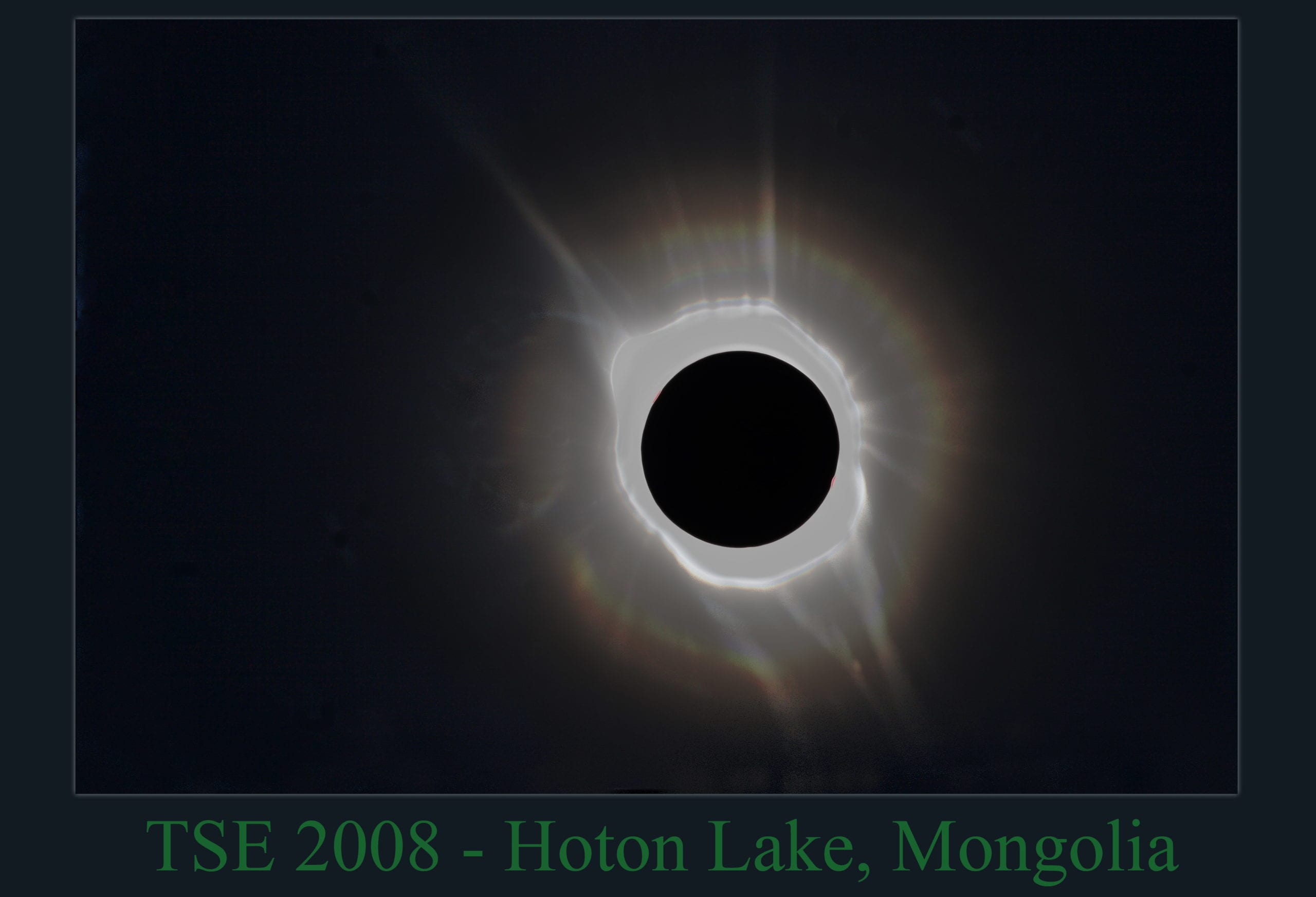