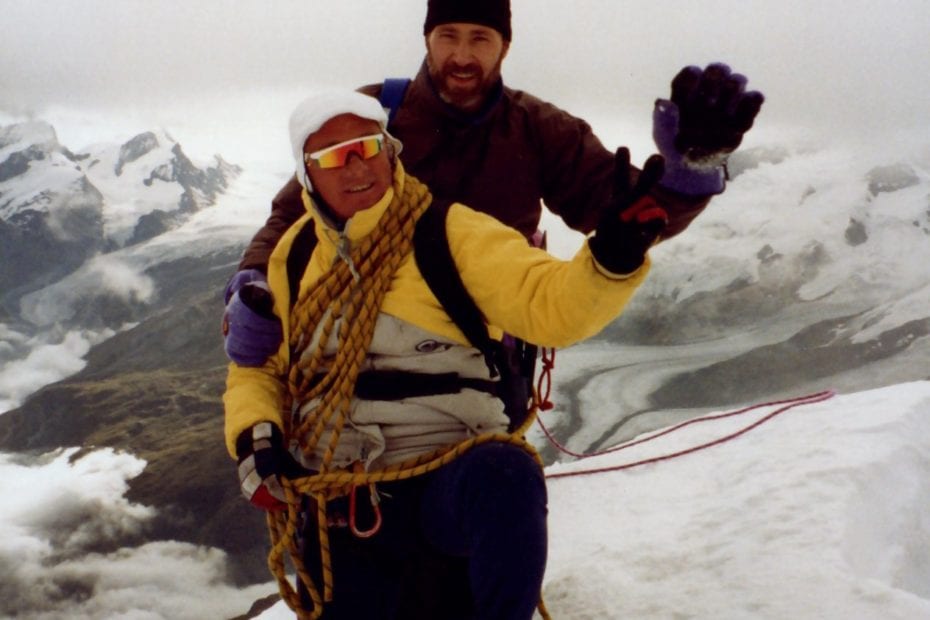 I like mountains. As I mentioned in a previous conversation, I have had a climbing bug over the years. Let me be honest: this came about because I was—and still am—a bit afraid of heights. I decided to face that fear head-on. I started climbing some (relatively easy) mountains. These are not “climbed Everest” stories. These are merely “guy afraid of heights deciding to beat this condition” kind of adventures. I will say that it worked. While I still feel a bit woozy when I stand too close to the edge of some deep drop, I do not have the same reaction that I once did. It’s good to face our fears.

Let me describe the height of my mountain adventures, the toughest peak that I’ll ever take on. That is the Matterhorn, outside Zermatt, Switzerland. Standing at 4,478 meters (14,692 feet), it is only the 12th-highest mountain in Western Europe, but it is taller than Mt. Whitney, the tallest in our Lower 48 states. About 3,000 climbers summit the Matterhorn every year (but maybe not this year, with COVID-19), with more making the attempt.

Though “easy” for experienced mountaineers, it is a serious climb, with lots of exposure. Over 500 alpinists have died on the mountain, making it one of the most dangerous in the world. The number of deaths had been averaging about nine per year in the 1990s but has fallen to about five per year now. It is not a mountain to take lightly. You are insane if you climb without an experienced local guide. You need proper equipment—good boots, ropes, helmets, crampons and ice axe, and mountaineering clothing for the fickle weather.

That is because the Matterhorn has “objective hazards,” which is the mountaineering term for dangers related to the environment, those that you cannot control. Those include falling rocks and foul weather that can descend without warning. That happened to me. Yes, it is dangerous.

The first ascent of the Matterhorn was made in 1865, with a climbing party led by Edward Whimper. Their climb ended tragically when four of the seven members of the party died on the descent, when a rope broke. Among the dead was Lord Francis Douglas, the younger brother of the Marquess of Queensberry. The deaths created a huge stir throughout European royalty and the world, raising the question of “Why DO people climb mountains?” and ending the golden age of alpine first ascents.

The Matterhorn seemed to float into my head soon after I began climbing easy mountains. There is something alluring to its stark outline and the signature hook of rock near the top. I had spent part of the prior year learning to climb. I had practiced rock climbing in Yosemite with the Yosemite Mountaineering School, and snow climbing leading to a climb of Mt. Hood in Oregon. For that ascent, I’d learned the use of crampons and techniques to (maybe) survive a slip on snowy terrain with ice axe arrests. I had been hiking extensively above ten thousand feet in the Yosemite backcountry, so had altitude endurance and adaption. I had the basics.

Suddenly, I was called to make a business trip to Germany, when international trips were uncommon in my career. Then the cost of flights was a budget-breaker, so the July trip was welcome. My business ended efficiently and earlier than anticipated, on Thursday. My flight home wasn’t until Monday. What to do? Ah, a great time to visit Zermatt. I booked an evening train.

I wandered around the tiny town, looking up at the peak from the small cemetery where some fallen members of the Whymper party are buried, along with many other victims of the mountain. It was sobering. I meandered to the mountaineering center, where professional local guides gather.

There I encountered two other Californians. One tall guy was the coach for the women’s basketball team at UC Davis. He and his friend had trained the past year for their ascent and were leaving the next day. We hit it off, talking about our love of mountains, including our own Sierras. They had hired two Italian guides to lead them to the top, one per person. Their lead Italian guide met them while we were talking. I asked, would they mind if I joined them, if there was another Italian guide that might be available on short notice? The Italian guide eyed me carefully, sizing me up. Luck would have it that there was a free guide. But first—had I been there in Zermatt for at least a minimum few days, acclimating to the altitude?

Carpe diem. Back to my character, Joe Denkensmith:

I would need good mountaineering boots and mountain gear. It was 4:30 and the mountaineering shop closed at 5:00. Did they have boots? Only one pair, in European measure, barely large enough to fit my feet. I bought them, a budget-stretcher. We would be off the next morning.

I met my new Italian guide, and though he spoke no English, we seemed to understand one another. The guides all were professional, checking each client to assure themselves that they were not leading anyone who was a risk. I passed that silent test.

From Zermatt, the trek begins with a gondola ride, then an easy hike to the Hörnli Hut, at 3,260 meters on the north-east ridge. Most ascents start from the Hörnli Hut well before dawn. The hut accommodated (at that time) fewer than 100 climbers for a half-overnight stay. (The replacement hut, built in 2015, offers 130 beds.) Then, they served an austere mountain dinner, and a biscuit and tea at 1 am before beginning the ascent at 2 am in total darkness, lit only by our headlamps strapped to helmets. I can vividly recall the magical sight of a string of lights leading up the black mountain on the helmets of my fellow climbers.

The reason for the early start is that the mountain becomes more dangerous in the afternoon, when sudden storms can roll in. The sun’s heat on afternoon snow can cause avalanches. We slogged upward at a methodical but brisk pace. That part of the mountain is like ascending a thousand stepladders. There is solid footing, the stone often flat, but with continuous climbing. The friend of the basketball coach began struggling, his breath coming hard, and we made more frequent stops as dawn broke on the mountain. Our three Italian guides began to mutter among themselves. The lead guide, guiding the basketball coach, stopped to ask with hand signals whether he really thought that his friend could make it. We pushed on. At another out-of-breath stop, the lead guide called it—the slowest member needed to turn back. They argued with the guides, who were insistent; we were moving too slowly to try safely for the summit. The basketball coach opted to head down with his friend.  Defeat etched their faces as they waved sadly and turned down. That left me and my guide facing each other. Nope, I was heading to the top.

Now I was feeling the altitude, as my guide increased the pace to make up for lost time. This was maybe his 300th ascent, and he climbed like a mountain goat. He was also eyeing the weather, with some clouds forming off in Italy. We reached the wall where members of the Whymper party had died, which has a fixed rope to make the crossing less dangerous. After the accident in 1865, Whymper had described that moment:

“For a few seconds, we saw our unfortunate companions sliding downwards on their backs, and spreading out their hands, endeavoring to save themselves. They passed from our sight uninjured, disappeared one by one, and fell from precipice to precipice.”

My guide and I climbed on. We reached the last ridge, becoming as narrow as one meter wide near the top. The angle there is maybe 30-45 degrees, but it was snow-covered, with thousand-foot drops on either side—death in Italy or Switzerland, take your pick if you slipped. I eyed the rope connecting me to my guide and was mildly assured by his solid handling of his crampons on the slick surface.

There was one person on the top ahead of us, a young woman from Sweden. We did a careful sideways dance past one another as she headed down and we took her place. That was a mountaineering moment. Like being on an airplane, but without the plane, and no parachute. Breathtaking.

We didn’t spend long on the summit. My guide pointed to the clouds and signaled that we needed to hurry. It was past noon and we were late to start down. We escaped the ridge, and now I faced the surprising difficulty of descent, fighting the psychological tendency to lean into the mountain against the dizzying scene facing downward. But leaning means that your feet are not aligned against a perfectly vertical body, and that causes slips. Once my feet slipped and I fell forward, my crampons coming loose and clattering ten feet down the mountain. My guide fetched them, adding some four-letter Italian words, and we kept going.

Now it was snowing, which made the descent more treacherous. We reached another steep section. My guide checked my harness, looped the rope around a fixed protection steel piton (without the backup protection that they had taught me in Yosemite), and ordered me over the edge. I rappelled down the length of the rope. He was at my side in a moment. The weather turned to sleet, and the footing became more slippery yet. We repeated the maneuver at every fixed piton, rappelling to save time, he following me and freeing the rope. I remembered that the Whymper party fell on the way down, when perhaps they had lost a slight edge of caution.

Nineteen hours after starting, we made it down the mountain. Every muscle in my body was exhausted, but I was happy. My guide was unhappy with the additional risk, and I couldn’t blame him. Nothing can eliminate the objective hazards on a mountain. My large tip, emptying my wallet, mollified him, and we parted smiling. I dumped my undersized boots and hobbled away on blistered feet, back to the train station and home.

That was my Matterhorn adventure. Don’t try it without a guide.

Now tell me, what was one of your most memorable outdoor adventures? 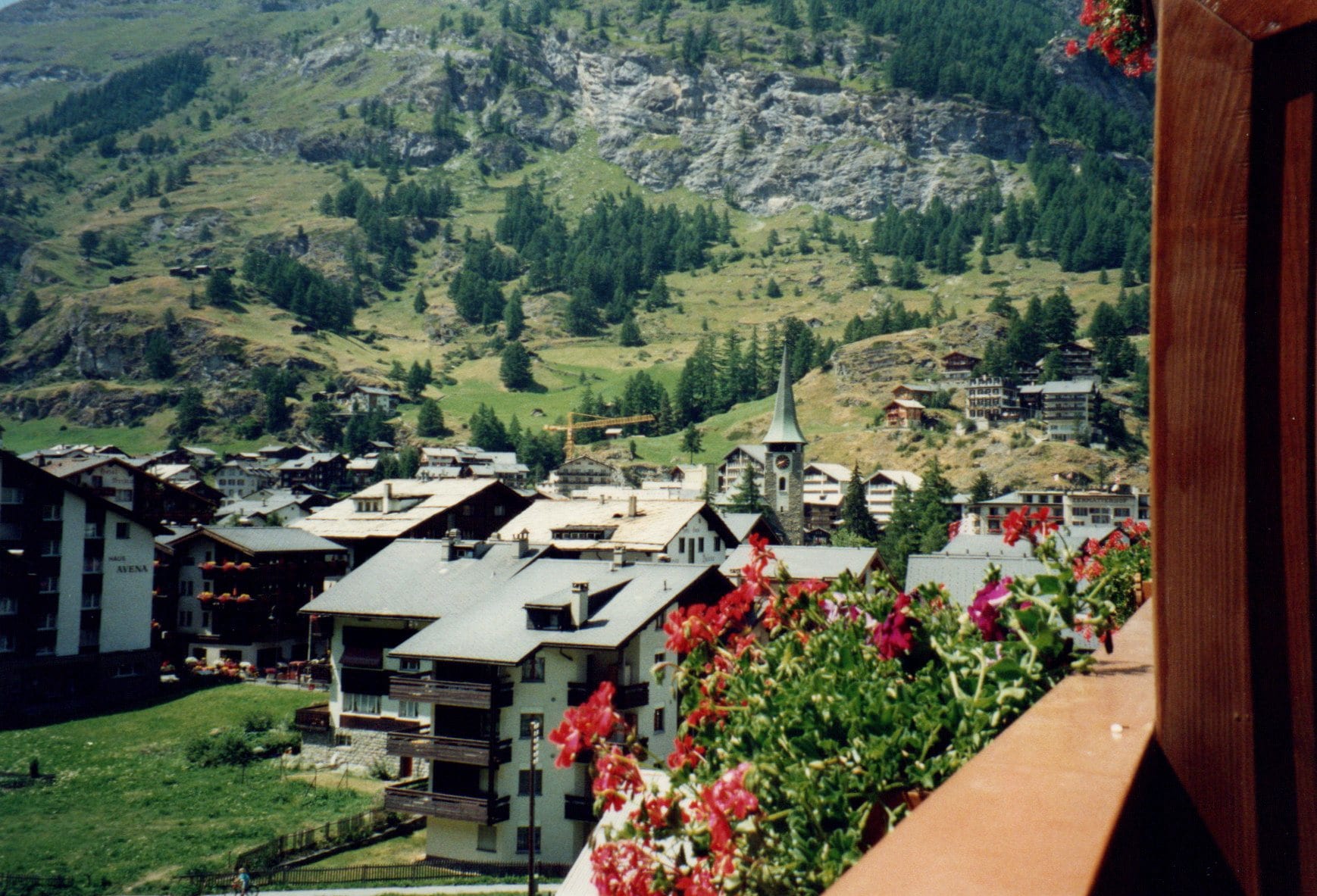 The town of Zermatt 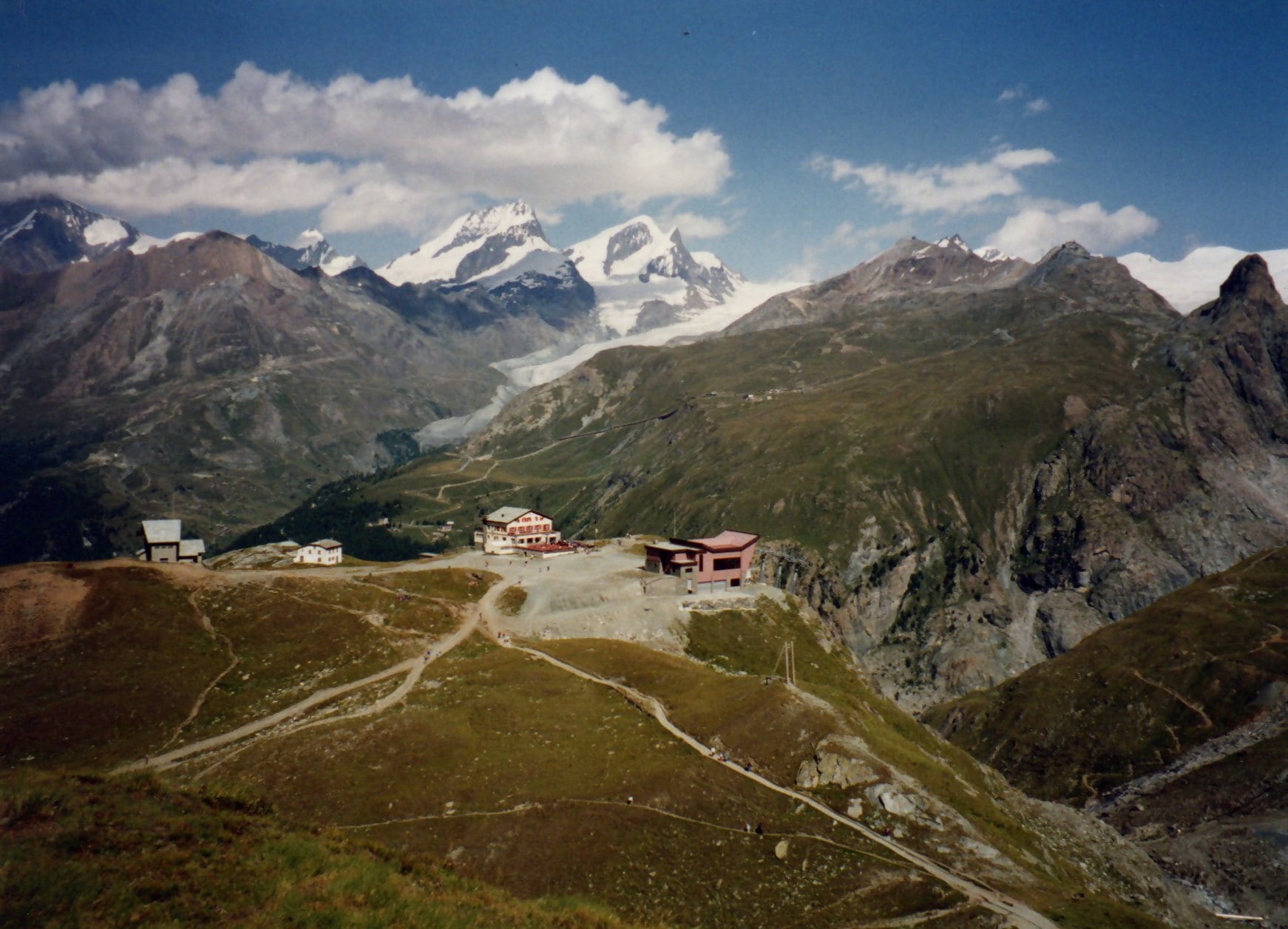 Above the Hornli Hut Looking Down 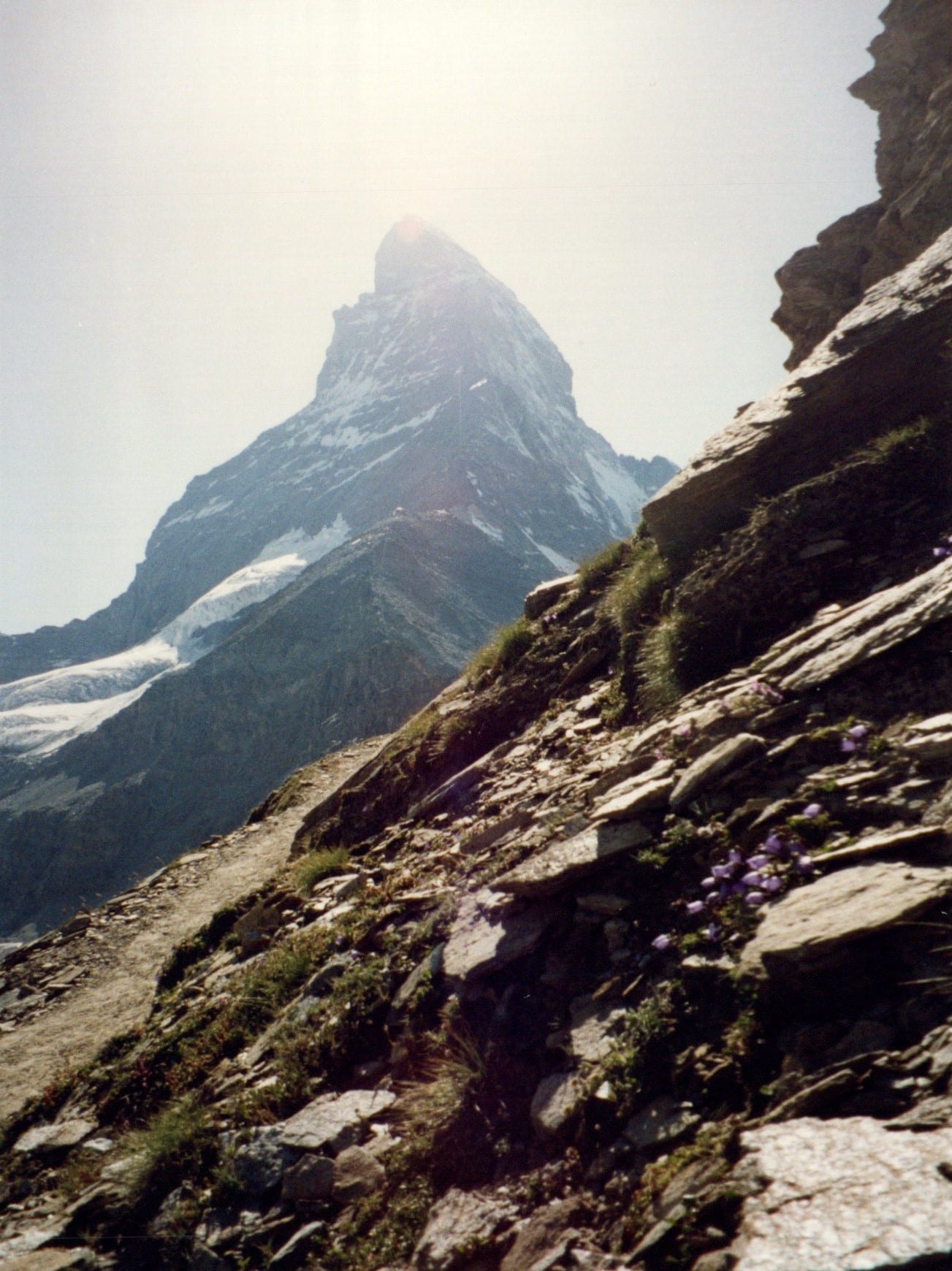 The Matterhorn On Approach

2 thoughts on “Climbing the Matterhorn”